How To Write Effective Dialogue In Your Novels

If you follow the techniques outlined in this article, you'll be able to write with dialogue. The techniques will allow you to avoid writing one-dimensional characters that fail to grasp the reader's interest and imagination.


"Characterization is an accident that flows out of action and dialogue." Jack Woodford


Wiki defines characterization as: 'the process of conveying information about characters in narrative or dramatic works of art or everyday conversation. Characters may be presented by means of description, through their actions, speech, or thoughts'.


Everyone you will ever meet in your life is a paradox, you included. Each person has a set of beliefs and understandings; this is the never-ending internal dialogue, the voice in your head, which dictates your thoughts and feelings.


This is the first dimension.


The second dimension is your external dialogue, the words you say.


Your internal thoughts and external dialogue are not always the same.


The final dimension is your reaction to events. How you react to events is a mirror of your internal dialogue and often in contradiction to your external dialogue.


It is this contradiction between internal thoughts, external dialogue and reactions to events, which creates believable and memorable characters.


Example
Imagine a situation in a novel…

A father's only son is murdered by a serial killer. The father says at one point in the novel, "I intend to find and kill the man who murdered my son." Then, later in the climax of the novel when the father does indeed come face-to-face with the killer, rather than kill the murderer, he turns him over to the police. It turns out that the father's external thoughts and internal dialogue where not aligned - just like real life. Perhaps the father believed that justice, rather than murder, was the correct moral solution. Thus, the novel sees the father contradicting his dialogue, and his actions reflecting his internal feeling. It is this complexity that makes for a three dimensional character.

Dialogue is Not conversation

Just listen to any real-life conversation and you will see it has little resemblance to the dialogue written in novels. When we converse in real-life situations are sentences are clipped, we talk across each other and most of the time use non-verbal cues for communication.


The mistake many writers make is to see dialogue in a novel as a reflection of real-life conversation - this is not the case.


The aim of dialogue in a novel is to fulfill one of two very distinct goals:


Dialogue is a tool.

To write effective dialogue you must first understand what Robert McKee calls 'beats'.


He explains that the 'beat' is the smallest unit of construction, used to build scenes and acts. He defines a beat as, 'an exchange of behaviors in action/reaction'.


A second important aspect of a beat is that it passes a very particular piece of information or documents a change in character. Dialogue can be made up of a string of beats, each with its own distinct direction.


For example, if we return to our fictional novel that sees a child killer on the loose. The following exchange takes place between the father of a murdered child and a police officer. As we have said previously all dialogue must have a direction. The aim of this exchange is to set up the father as a person who has said they will kill the murderer of his child. It also provides important plot information (private investigator), which would be built on later.


It had been a few days since they had discovered the mutilated body but this was the first time the police officer and the father had met in person. They had chatted on the phone twice, but the conversations had been truncated, nothing more than short, unemotional exchanges of information.

"I am sorry for your loss," said the policeman.

"Yeah," said the father, his head in his hands, not looking up as he spoke.

"I have just spoken to my boss and he is expecting to make an arrest in the next few days," said the officer.

"I hope so," replied the father, looking up. "You are not the only person looking for the killer. I have hired a private detective to follow some of my own theories."

The officer's face failed to show any emotion. "That's regrettable. We don't encourage…" He paused searching for the correct word. "Vigilantes. I hope you plan to pass any information you gather to the police."

"No," says the father looking directly into the officer's eyes. "I intend to find and kill the man who murdered my son."

If we look at this exchange we can see the action/reaction process:

[ACTION]"I am sorry for your loss," said the policeman.

[REACTION]"Yeah," said the father, his head in his hands, not looking up as he spoke.

Here we see the police officer unable to cope with the deeply emotional situation and reverting to a well-worn, even clichéd comment. The father has been under extreme emotional pressure for days and has spoken to countless police officers. He feels helpless. The authority figure of the police officer is challenging him on many levels. Therefore, his reaction is almost a non-reaction as he tries to maintain some control of the situation.

[ACTION]"I have just spoken to my boss and he is expecting to make an arrest in the next few days," said the officer.

[REACTION]"I hope so," replied the father, looking up. "You are not the only person looking for the killer. I have hired a private detective to follow some of my own theories."

Unable to express his emotions the police officer tries to engage in conversation by offering 'information' he feels the father will find useful. The father's reaction is one of anger and leaves him feeling more helpless as a father and man. In the exchange, he tries to gain some level of control by telling the police officer about the private detective.

[ACTION] The officer's face failed to show any emotion. "That's regrettable. We don't encourage…" He paused searching for the correct word. "Vigilantes. I hope you plan to pass any information you gather to the police."

[REACTION] "No," says the father looking directly into the officer's eyes. "I intend to find and kill the man who murdered my son."

The police officer suspects the father is not telling the truth about the private detective. His response is to 'toe-the-line' and provide un-emotional information. This further angers the father and he responds with the threat to murder the killer. At that moment, the father believes his words since they give him some control and increases his feelings of masculinity. Only his later actions will show his true internal voice.

In order to write effective dialogue, here are the key points to understand:

What to do Now…

Practice! Think up a simple section of dialogue, just one beat with two characters and write it out. Focus on action/reaction. Try to express a character's internal thoughts with external dialogue. Keep it simple and remember the goal (direction) of the beat.

Claim your free eBook today and join over 25,000 writers who have read and benefited from this ebook.

'It is probably one of the best books on writing I've read so far.' Miz Bent 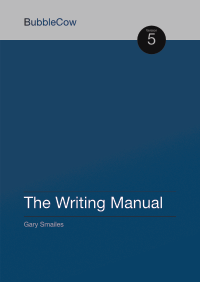